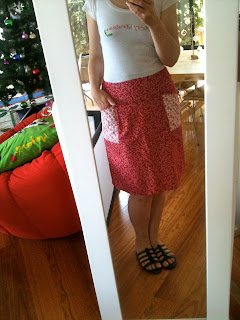 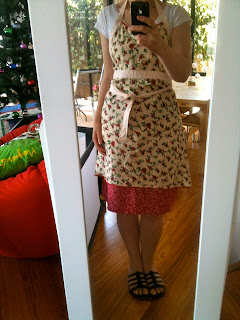 I'm still on a major fabric and yarn de-stash (really! it's never-ending!), so I decided that this year's Chrissy outfit would have to fit into my no-buy, use what I've got brief :) The majority of my Christmas fabric is small patchwork sized pieces, but I did find two pieces that were big enough for clothes ... the red fabric I really love because it is Christmassy, but in an understated way, with white meandering holly leaves. The pocket fabric I thought looked like baubles until I finished the skirt and then decided that it looked more like a Target Ad :(  But no, in my head I'm sticking with the baubles thought :) The apron fabric is tiny poinesettas and holly ... I like the choice of this one because it has a slightly old fashioned look, good for a pinny I think :)
...so, the pattern specs :) 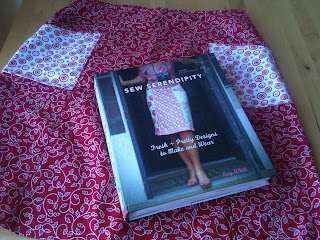 The skirt was taken from Sew Serendipity by Kay Whitt ... I lost the plot slightly as to what size I made, but I think that it was roughly size small (following the pattern measurements I made a mock-up skirt in small, which was way tight, so made the skirt in a medium, which ended up being way big(?), so finally went with the medium but took in huge side seams ... it wasn't the best solution as the pockets are now a lot narrower than they should be, but at least I'll have a better idea of size next time).
The apron is again the Patternless Kitschy Apron by Jordana Paige, well a variation of it as I didn't have enough fabric for the cool crossover top ... love the possibilities with this apron pattern (thanks Jordana!)

Sorry for the absence of blog posts of late, but I'm back, and I'm in need of playing catch-up :D
I've been busy with the making, just slack with the documenting! 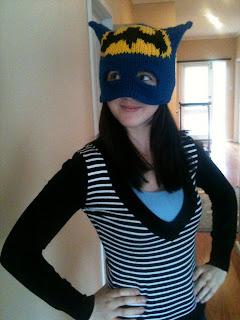 So I thought that I would start with some hats ... hmmmmm, first off, I made this Batman hat for a Batman obsessed two year old ... he kept it on his head for about two seconds (not even long enough for me to take a photo!), before whipping it off and saying that it tickled his eyes :D
The next time that I turned around, his slightly crazy, no, make that his extremely crazy mummy was wearing it and asking if she could have it ... I think that winter will be a laugh this year!! :D
(Here is the Ravelry link to the pattern info) 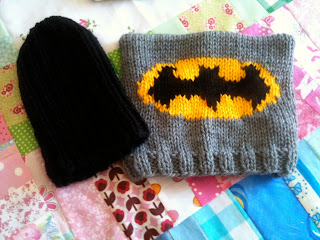 I made this second Batman hat, (minus the tickly eyeholes you will notice!), and I'm glad to say, that he liked it a whole load better ... still no modelled photo, but I'll post one when he (or maybe some other crazy family member ... got quite a few contenders out there) decides to wear it :D 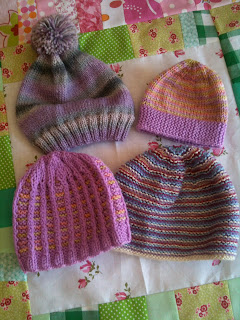 OK, so these hats are slightly less superhero-ish, but cool all the same. The black one is the Biddle Ribbed Hat by Tonya Wagner, the pom-pom one is The Basic Hat Pattern by Ann Budd, the tiny garter stitched edge one is Cute As A Button by Niftyknitting, the one below the pom-pom is the Tricorder Hat by Katherine Fagan, and the reversed stripy one is from a book that I have lying around here somewhere, just can't put my hand on it at the moment, but I'm sure that I'll find it as soon as I finish writing this post! I'll be putting them all on Ravelry over the next few days, so I'll add my links to the patterns then :)
Oh yeah, and the blog post title ... a joke from my primary school days about what Batman's mum shouts at tea-time ... lame yes, but the mere mention of Batman brings it to mind :D
Posted by Linda at 2:39 PM No comments: 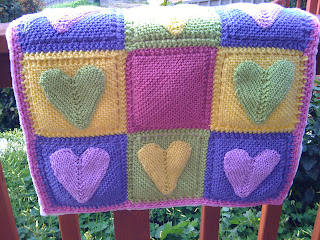 It's been a while since I made my first heart blanket, and after recently being reminded of it in a family photo, another one was requested for my new granddaughter :) 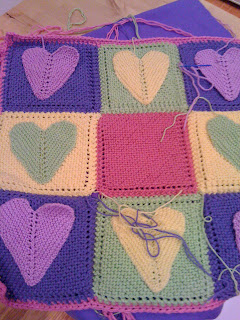 The basic idea stayed the same this time, but I did use two different patterns ... I chose a diagonally knit dishcloth pattern with an eyelet edging (the eyelets made a really nice guide for sewing the blanket to the backing) and an eyelet heart pattern that matched perfectly :) Both patterns were super easy and didn't require the attention that my last ones needed, and didn't always get :D 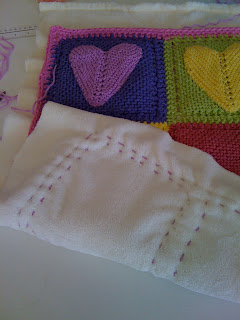 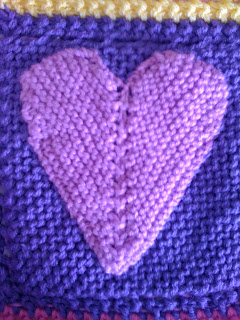 I tried for ages to get the whole blanket to sit a bit flatter, it has a tendency to 'puff up' ... I was going to do a quilting stitch around the hearts to anchor it a bit better, but then found out that my daughter thought the puffiness was one of it's best features!!  :D 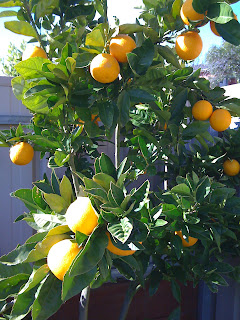 It's taken 7 years for our citrus trees to yield any fruit, but this year, for some reason, they've gone into overdrive :) 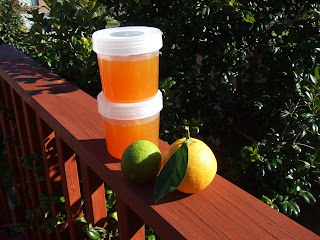 I had this thought of making marmalade but was totally put off by words like sterilising, setting point, jam thermometers, *shudder*, and visions of my mum spending hours in the kitchen, sweating over making jam after we'd collected wild blackberries and damsons from the hedgerows and woods. I was of course hoping that there would be an easier way, so typed 'easy marmalade' into Google and ... score! the very first hit was 'Absolutely Fail-Proof Easy Marmalade'. 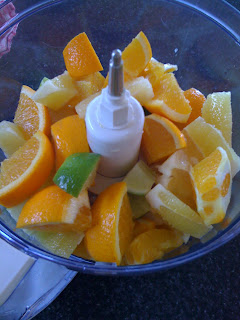 It's fast to make, easy to remember, and doesn't need any of the usual time consuming jam-making processes!
So basically you boil 6 oranges (or any other citrus fruit) and 1kg of sugar together for 20 minutes, pour into jars (I used Woolworth's everyday Essentials containers so that I could keep them in the freezer), and thats pretty much it! 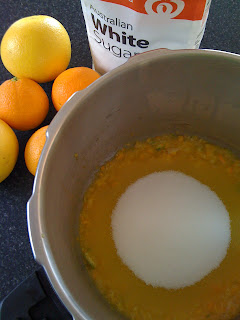 The first batch I made, I followed the advice from the comments left, and peeled half of the oranges before processing them ... definitely a good move as it was still chunky but spreadable ... yum!
I made the second batch with just the juice (the first one cooked so quickly that I had to make more, even if it did mean going and picking the fruit at night by torchlight! ... but hey?, when you're on a roll ... ). So I used 4 cups of juice with 4 cups of sugar and a packet of Jamsetta pectin, boiled together, just the same for 20 minutes. I don't know whether or not I actually needed the pectin, but according to the million recipes out there, it seems like most of the natural pectin is in the skin, pith and pips, which I didn't use ... anyhows, the clear marmalade came out my favourite. 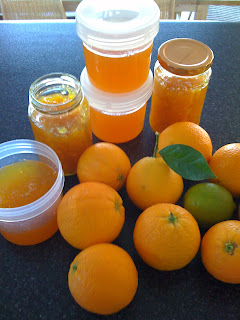 Or maybe it's orange jam not marmalade?... either way, for half an hours work, it turned out awesome and I wont be needing shop bought marmalade again :)
Posted by Linda at 1:07 PM No comments: 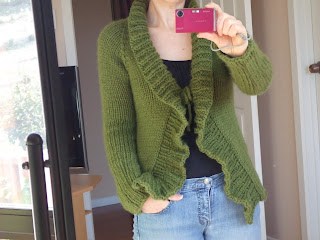 It's not very often, in fact I can't remember ever buying a knitting book and wanting to make pretty much every pattern in it, until my copy of Custom Knits arrived from the Book Depository last week. OK, I say pretty much because I can't see the City Cape Poncho happening for me at this time, but hey, who knows ... I've been known to change my mind before ... :D
To decide which pattern to start with first, I did a quick stash check and found that I had 10 balls of Moda Vera Shiver (the same yarn that I just used for my Super Birthday Sweater) ... yep, I bought a heap a while back when Spotlight were selling it off for a dollar a ball!
So after checking out what my fellow Ravellers were saying and knitting, I cast on for the Lion-Neck Cardigan on page 43. (Really, what did any of us do before Ravelry? .. love it, love it!) 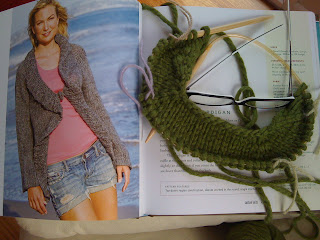 This pattern was fast! I was listening to audio books on Librivox (the perfect multitasking ... knitting and reading), and completed this jacket in two mystery novels, A Strange Disappearance by Anna Katharine Green (1880) and The Agony Column by Earl Derr Biggers(1916) :) 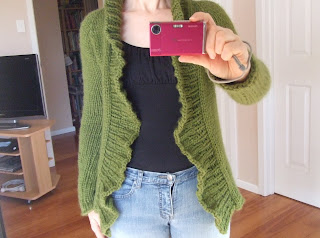 If I make this again, and I think that I will be, I'll omit the sleeve shaping completely, to make the fitting look more like the one on the model :)
I can't decide yet whether or not to use the ties ... ?
Posted by Linda at 9:59 AM No comments: 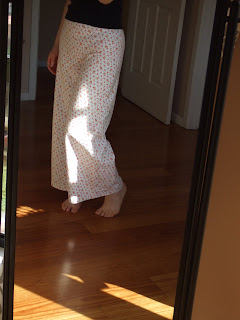 A few months ago I was given a sewing magazine as a pressie ... it's a UK publication called Sew, by far the best sewing mag that I've seen. Not only are there heaps of cool sewing projects and tips inside, but also it comes each time with a free dressmaking pattern :) 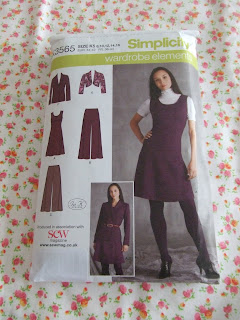 This issue came with Simplicity 3565. The picture on the front of the pattern shows the clothes made up as winter versions, but I especially liked in the magazine that they showed them in summer fabrics ... looking forward to making the dress for when the weather warms up :)
I really didn't want any more winter pants, but I was looking to use the flannelette fabric bought from Savers for $3 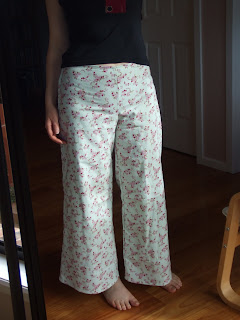 ...so, two pairs of non elasticated lounge pants ... I loved that they were so easy and fast to make ... two main pattern pieces, a left hand seam zip, and a simple hemmed waistline ... easy!
And on the knitting front ... how cool is this?! Check out Sherrill's Belle of the Ball podcast, where she talks about making a vest for her daughter, from my Flinders Sweater vest pattern! :)
Posted by Linda at 12:01 PM No comments: 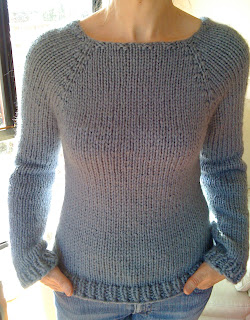 I can't begin to tell you how much I love this Super Birthday Sweater from Blue Alvarez! It's the first top down pattern that I've seen that divides the neck edge cast on stitches into quarters as apposed to thirds ... it kinda put me off making it for a while, thinking that it might sit funny when it was on, but I've gotta say that it's totally awesome :) Fits great, sits great, was as easy as, and best of all .. I followed the pattern without changing anything ;D (well, other than omitting the middle stripe!) ... oh, and it's a freebie :)
I used 9 balls of Moda Vera Shiver from Spotlight, (some of which I frogged from a previous sweater) and size 7mm needles. 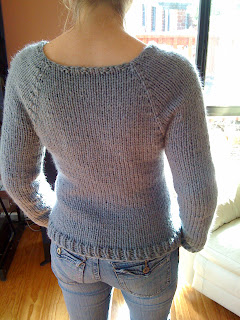 It was really fast to make, beautifully written, and has inspired me to try more top downs with the quarter divisions ... love it :)
Posted by Linda at 10:13 AM 6 comments:

This is a Flickr badge showing public photos from clickertylinda. Make your own badge here.